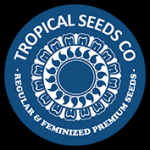 Tropical Seeds was born thanks to their founder, Maxi’s idea of creating a project in which a large number of landraces would be grown, studied and bred.

This hard work was done in some large facilities under something very close to a Tropical climate. Some big green houses in the Canary Islands were packed with incredible genetics from different parts of the Globe, containing pure and psychedelic rich cannabis lines.

After a number of years trying iron out some undesirable traits from these unique lines, the dream was eventually realised and a number of strains were created that were perfect to release to market, under the Tropical Seeds brand.
Tropical Seeds work with a clear philosophy in mind; creating new strain options with more strength, vigour and beauty than anything else available on the market. Their research has led them to conclude that growers are becoming bored of the famous strains that have become overbred and dull. Instead, Tropical Seeds want to introduce something new and exciting as often as possible.

Such is the desire from Tropical Seeds to direct their focus onto new projects, the company have actually discontinued some of their older strains. This is a bold move but one of that has paid off, since the popularity of their more recent strains has won them plenty of plaudits within the industry.

There are a number of strain in the Tropical Seeds library that have gained notoriety, in particular Smooth Smoke, an indica strain with a strong structure and dense resin production and Ciskei Regular, a South African strain that can grow perfectly both indoors and outdoors.