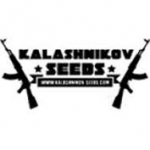 Kalashnikov Seeds is a group of old school growers based in Kuban, close to Sochi.  All of their strains are the result of cross-breeding AK-47 (Serious Seeds) clones with Russian, Dutch, Spanish, Eastern European and Afghan landraces.

Kalashnikov Seeds have been breeding cannabis since 2002 and started to sell in 2013, becoming within a short time a top brand on the post-soviet union cannabis market, actively competing with many western seed banks on their own territory. Additionally Kalashnikov Seeds have developed a range of Express strains. Theу are characterized by a shorter period of flowering than their feminized counterparts.

Their idea is to combine the west and east in its union of flavour and taste with northern power and endurance. It is the essence of Kalashnikov Seeds bringing unique and bright varieties from the authentic Russian manufacturer and they are proud of the opportunity to delight growers and smokers around the world with their excellent rare genetics